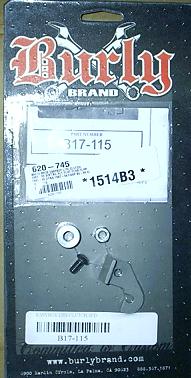 One of the unavoidable problems of riding around the city is the constant shifting of gears up and down. The 2006 Ellis County Toy Run and the freezing temps showed me that my left hand did not tolerate a lot of clutch action after I broke it the prior year. After a sore hand from riding all Winter I started a looking for an affordable solution to an easier clutch pull without losing holding power at my clutch. The answer I found was the Burly EasyBoy Lite Clutch Kit.

After I had all my parts together I planned an evening to install the clutch kit. Overall the install was pretty simple and straight forward. Your bike’s manual will show you the details; but you remove the exhaust to get to the transmission end cover first. Then drain the transmission and remove the end cover for the clutch release. A pair of good snap ring pliers makes it real easy to take the snap ring out that holds in the ball and ramp mechanism. At this point you install the EasyBoy Lite Clutch Kit and start putting it all back together. The biggest thing is to remember to readjust your clutch cable afterwards.

Before the install I used a fish scale to measure the pull it took to get the clutch to break over. At that point the pull was measuring at 25 pounds. After the install it was measuring at 20 pounds and this settled down to roughly 15 pounds after a week.  I liked this upgrade as soon as I got caught at a red light the next time. It takes almost no pressure to hold the clutch in and shifts smooth and easy like it always did – it just takes less effort on my part to do it.

I liked the kit enough that I recommended it to my Dad. He bought an Easy Boy Lite Clutch Kit and we installed it the following weekend. While he said he did not have any problems with working his clutch; he did say it was amazing how much easier it was to work after the install. After using this clutch kit for over a year I can say I am still glad I installed the clutch kit and often recommend it to friends. Of all the parts and “stuff” I have bought for my bike, this was probably the best investment.

The Burly EasyBoy Lite Clutch Kit parts laid out prior to assembly with the inner ramp mechanism. The only part to watch out for during install is to put the nut on the top of the assembly as you hold it in your hand. If you do not do this you will limit your release travel and your clutch will not work correctly. If you follow the instructions you should not have this problem though.

The Burly EasyBoy Lite Clutch Kit assembled and installed. From here all you have to do is follow the manual and readjust the clutch.