I have wanted a set of the pop-up flush mount gas caps since I first saw them in a parts book a couple years ago.  Now that I have them – I wish I would have gotten them sooner.  They are everything I was hoping they would be; but, they do have a couple of negative points also.

First, the basics of this piece of equipment.  These gas caps don’t give your motor 5 more horsepower.  They don’t make it handle better.  You could argue that they reduce wind resistance due to the low profile design.  They do make it look a little bit different from the bike beside you at the local watering hole.  To operate these caps is very easy; simply push in and turn the direction of unscrewing the gas cap.  The center piece will “pop up” and allow you to unscrew the gas cap.  To put them back in is just the exact reversal of removing them.

Attempting to be an optimist, we’ll cover the good stuff first.  These gas caps are well machined and fit great on my ’97 Fat Boy.  The knurled edges provide a decent grip for unscrewing the gas cap – but one word of caution.  It is easy to screw them down to tight and hard as hell to unscrew them once you have done so.  Back to the positive though, the chrome finish of the caps is amazing. Let’s not forget, they look good.

Now the parts of the gas caps I really don’t like.  First, the rubber ring that is supposed to be the seal for the gas caps really isn’t up to par.  The rubber seals are weak and loose.  As long as you are paying attention when you put the gas caps back on they don’t make too much of an issue. I am currently looking for a replacement rubber ring, and if I find one I’ll update this review.  Second, you have to pay attention to how close you fill the tanks up to the bottom of the nozzle port.  If you fill up to the bottom of the port, you may have some gas get siphoned out going down the road.  I have only had this happen once, but it can happen as I should have paid attention to other people’s comments in the customer reviews. 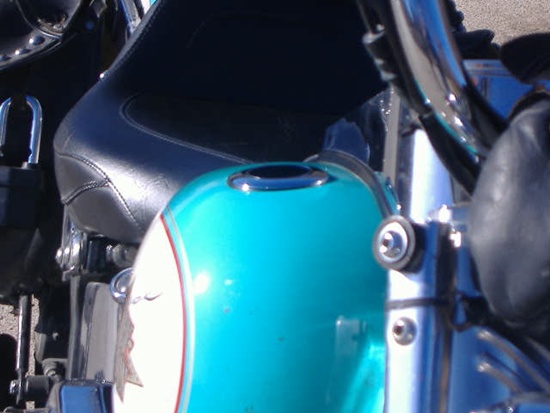 Overall, I do like these gas caps.  They look great, work good, and make my bike just a little more of “my bike”.  I like them and that is what counts, right?

After four months of use these little caps had problems. I worked around the gas-weeping-from-under-the-cap issue by tightening up the rubber seal.  Two months after I got that fixed the center cap quit working.  The big issue is that the pop-up center quit popping up.  The problem felt to be the spring inside the cap quit pushing up.  I could shake the cap side to side and the center would slap in and out.  Since the cap wasn't usable, I called J&P Cycles and was refunded in full including the shipping cost to return the defective caps.  While these caps didn't work out for me; I will probably try a set again. I liked them - they were sleek, clean, and made the gas tank look good.